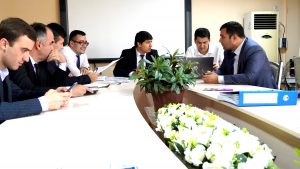 From June 22 to June 26, the Interdepartmental Working Group to analyze the state of activity of technology parks and innovation centers, created by the Order of the Ministry of Economic Development and Trade of the Republic of Tajikistan dated June 1, 2022 No. 31, visited technology parks operating in the Sughd region.

The purpose of this visit is the timely implementation of the instructions of the Government of the country in the field of analysis and monitoring of innovation and technology parks, in particular the implementation of paragraph 1.8 of the Action Plan of the National Strategy for the Development of Intellectual Property of the Republic of Tajikistan until 2030.

During the meeting of the Working Group with officials of technoparks, discussions were held on the highest goal of the accelerated industrialization of the country through the introduction of innovative inventions and modern technologies, explanatory work was carried out in this area. The members of the group also got acquainted with the work and promotion of industry initiatives of technology parks, exchanged views on the existing regulatory framework for innovation activities in the country and tax and customs benefits.

Transparent tram Abacus will put on the old rails